The SAGA Age of Vikings book presents 12 very different factions to players. This series will review each one in turn.

The Roman Empire fell, as all things fall, and its capital moved to Constantinople, known as the Second Rome.

The Empire waxed and waned over the years, but the map above shows the empire circa 867, a time period relevant to SAGA: the Viking Age. Even here the empire is shrivelled compared to what it once was. However almost the entirely of Asia Minor was lost following the Battle of Manzikert in 1071. At this point, the emperor appealed to the Pope for aid, triggering a large movement of troops eastwards. But that’s another story.

The Last Romans provide the player with a number of options. Hearthguard are mounted, and may additionally be taken as horse archers. One unit may be on foot as Varangians. Warriors may have bows, while Levy choose between slings and javelins.

Harald Hardrada appears again as a legendary Warlord choice, and taking him means any number of Hearthguard may be taken as Varangians. He also allows you to roll Viking SAGA dice for additional attacks.

Your second choice is not a Warlord but a unit. The Klibanophoroi are heavy cavalry who inflict a fatigue on any unit they charge.

Your Battle Board is as varied as your army, and you’ll find your unit choices will dictate which abilities you’ll want to maximise during the game. Massed Volley allows all your foot units with ranged weapons to shoot, while Kontos only works on a mounted Hearthguard unit. Protect allows you to change the target of an enemy charge, so keep those Levy units close to your Hearthguard! 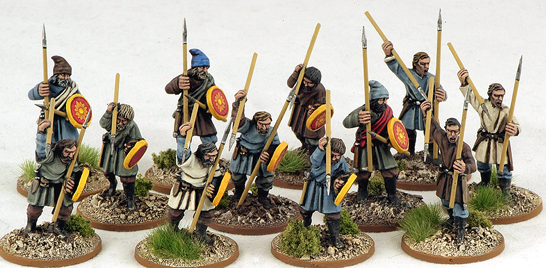 The Last Romans have a difficulty rating of two, and they are definitely trickier to use than a typical SAGA faction. You need to consider carefully what you want the army to do, and choose units accordingly, to ensure your Battle Board can be used as you need to give you an advantage.

This entry was posted on July 29, 2018 by davekay in Miniatures, Review, Tabletop and tagged byzantine, faction, review, saga, the last romans.