The logo for Magic: the Gathering Arena was revealed a while back. Other than the fact that is was electronic, nothing else was known about the product. From the demonstration this week-end it is clear that Arena is Magic’s answer to hearthstone. 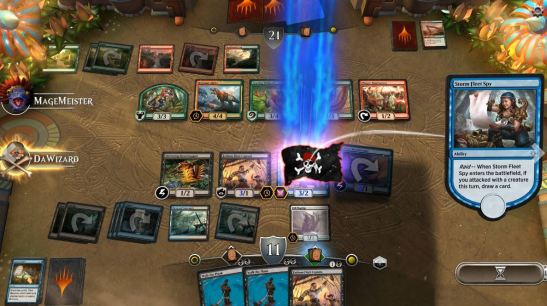 Their emphasis has clearly been on creating a play experience that first and foremost looks good to watch online. With their existing digital products that is simply not the case. The screen is cluttered, baffling, and it’s not generally clear what is going on.

If you ever look for Magic: the Gathering on Twitch, it is often below older, seldom played games, while Hearthstone is rarely outside the top 5 for spectators. This in my opinion is what they are targeting with this product. 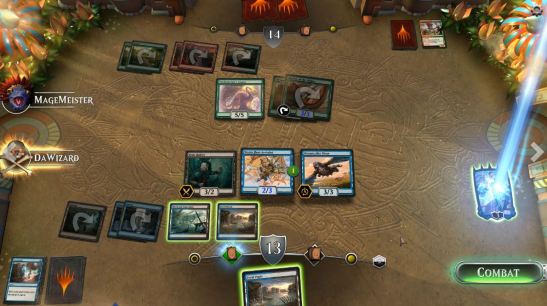 Not all details of the game have been released as yet, and the game itself is in Alpha stage, with a closed beta due to start later this year. With that in mind, while we see Ixalan cards involved in the demonstration, this won’t be the newest set when the game finally releases.

A few aspects I have picked up so far:

Drafts will be available

Trading cards between players will not be possible

The game will be PC only at launch, but is programmed in Unity so other platforms are likely to follow

Wizards were quick to point out that this is not replacing Magic the Gathering Online. I think there is an unspoken ‘yet’ in that statement, but we’ll see.

This entry was posted on September 10, 2017 by davekay in Computer Games, Magic the Gathering and tagged arena, beta, magic, magic the gathering.