This was the biggest holiday I’ve taken (five week in Britain and France) so it makes sense that this holiday haul of gaming items would also be the biggest ever… right? That is my reasoning anyway.

Games Workshop items make up the bulk of items bought. Most of these were delivered while I was away. Note to any Australians visiting the UK: make the time to go along to the Tottenham Court Road store. They will let you order anything from the GW website that is available for store delivery, except they will take your home address and send it there instead. A good deal, given the price differential between the two countries, and one I found impossible to ignore.

As well as the game items I picked up some Black Library paperbacks and some board games too. I saw the Plague Marines assembled in the game store in France decided a cheap edition of 40k would be worth it.

The board games were an opportunistic buy. Celestia is a game I played at PAX AUS in 2015 and have never seen in the shops since. The other two just looked interesting so I figured why not.

I have now acquired more miniatures than I have so far painted this year, so I have a lot to be cracking on with! The terrain was my first priority though, and my remaining tablescapes will be painted in an ash wastes style to give them somewhere to stand. 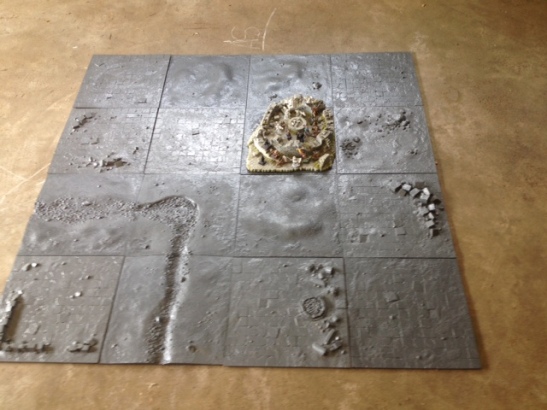 Ignore the tower in the above picture and imagine rusting industrial terrain instead.

2 comments on “The holiday haul”

This entry was posted on June 24, 2017 by davekay in Miniatures, Tabletop and tagged games workshop, purchase, uk.