Lorehammer: Magic of the Old World

This article is written to introduce players of Warhammer: Total War to the wider Magic possibilities available in the Warhammer games. These may appear either as downloadable content or in the next two games in the planned trilogy. Or they may not appear at all!

These descriptions are based on my recollections as a player of the tabletop game from late 3rd edition to early 7th edition. Magic changed between and even within editions, so there may be some more up to date info out there.

You may also enjoy my three articles on the armies of Warhammer.

I’ll start with the basics; the winds of Magic. The game so far is focused around these, though as you’ll see there are many more options for other armies. 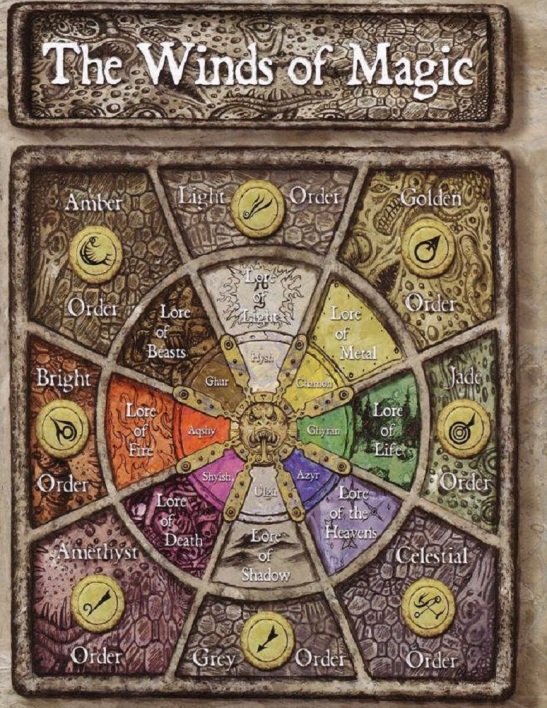 As far as lores go, Empire, High Elf, Wood Elf, and Slaan mages all have their pick of the eight lores. Other armies may focus around a few of these. For example Beastmen shamans tend to favour the lore of beasts.

As this wheel above shows each lore is generated by a separate Wind of Magic. For example the wind Aqshy produces the Lore of Fire which is used by wizards of the Bright Order, among others. For the sake of simplicity and consistency I’ll use the lore name in this overview.

Light Wizards dazzle the foe and impress the friend, with spells that hurt the former and buff the latter. The spell Pha’s Protection for example, makes your units more resistant to missile fire.

This lore too has spells which buff your forces, and reduce the enemy’s effectiveness. As well as the Gold Order, Chaos Undivided sorcerers may use the Lore of Metal. We’ve seen this one in the game already.

This lore is associated more with Wood Elves than any other faction, and Bretonnian Damsels also make use of it. It has the power to both heal and hurt. The Awaken the Wood spell causes damage to any unit partially within a forest.

Lore of the Heavens

Skink wizards are often seen wielding this lore which has long range spells which hurt the enemy, most spectacularly the Comet of Casandora. In the Empire, Celestial wizards wield this lore.

Back in 4th edition this lore was by far the most powerful, even allowing you to force an enemy unit to attack another! These days the lore is more balanced and therefore seen less often (funny, that). Shadow magic generally focuses on weakening the foe, but the Steed of Shadow spell allows a character on foot to make a flying movement.

Not to be confused with the Lore of Undeath, this lore too has longer range spells that harm the enemy, as well of some goodies for your own side. Chaos and Vampires make good use of this lore when they aren’t busy worshipping a specific god or raising the dead.

The quintessential wizardly activity of casting fireballs in the general direction of the foe rests in this lore. We’ve seen it in the game already.

Unsurprisingly given the name this lore is most closely associated with Beastmen, however Empire AMber Mages and Wood Elf wizards can also wield this. Spells include the Amber Spear, which hit units like a shot from a ballista.

The list doesn’t end there though. A few more lores of Magic exist.

High Magic is the lore of all lores and of none. It sits above the wheel of magic, and is generally used by High Elf and Slann mages, those older and more powerful wizards of the Old World. Curse of Arrow Attraction is a popular spell for the High Elf mage to cast, as it makes the target unit easier to hit with missile fire.

This lore is more associated with the Dark Elves who rejected High Magic along with the rest of Ulthuan’s rules. It focuses on spells that harm or impede the enemy. Dark Magic also has a spell that provides the caster with more power than was spent to cast the spell, allowing some truly awesome magical attacks from a fuelled up wizard.

The Horned Rat has its own wizards and they use the Skaven lores. This lore has tended to have a total of 13 spells, this number being especially associated with the Skaven in Warhammer. One spell unleashes a tide of rats on the enemy. We should see this lore released with the Skaven.

Sorcerers of Chaos Undivided have their pick of Metal, Death or Fire. Sorcerers with the mark of a particular god will use that god’s lore in battle. Nugle, Slannesh, and Tzeentch all have their own lores.

To make things even more diverse in Chaos Daemon armies, any daemonic sorcerers will use the special daemonic lores of Slaanesh, Nurgle and Tzeentch. These offer a different assortment of spells more suited to deamon armies.

The Tomb Kings of Khemri are the resurrected remnants of a truly ancient civilization, and their magic reflects this. Rather than casting spells, they read from scrolls, which are one use items. Spell effects are similar to the Lore of Undeath.

Ogres are another special case. Their Butchers can activate their spells rather than casting them. It is typical for an Ogre spell to deal as much damage to the caster as to the enemy! Ogre Butchers often die on the battlefield while casting.

Coming from Gork and Mork, Waaagh magic is restricted to Orcs and Goblins. Again, we’ve already seen this lore in the game, but other factions won’t have access to it.

Warhammer the games used to shift and change over time. Many things remained constant between the game’s 4th and 8th editions, but magic was not one of them. Spells changed, and in some cases lores appeared and disappeared! Wood Elves and Beastmen each had their own spells at one time, and an 8th edition player could tell you if these were in their final army books. I’d say if they were, then chances are high they will be in the Total War game.

This entry was posted on July 10, 2016 by davekay in Computer Games, Lorehammer and tagged magic, total war, warhammer.