This review comes from a look at the boxed contents of Warhammer Quest: Silver Tower, plus a quick play through of the new rules and some consideration of how this compares with the 1994 original.

The premise of this game is straightforward. Invade the Silver Tower and topple its lord. The adventured in the book let you take control of a group of adventurers dedicated to this cause. The number of adventurers can scale up and down. If you take more, more enemies show up to test you. Take less, and you can have ‘helpers’ along with you to even the odds.

The board and miniatures are both high standard. The plastic miniatures are multi part and require assembly but a book of instructions provided promises to make this a hassle free task.

The game provides you with a series of adventures taking you through the Silver Tower and using all of the double-sided board pieces that come with the box. There are no plastic doorways as all travel is done via portals. The same pathway doesn’t lead back that way it came, and if you stray too far from your fellows, you may be lost in the mystic maze.

There is a variety of enemies to face, but they all follow the same theme of Tzeentch’s chaos forces. Except those weird goblins. I have no idea what to make of those. I don’t mind them, but they don’t fit the theme of the rest of the box.

The new rules are streamlined and provide a great basis for quick, clear gameplay. Each hero has four dice, and the actions each can take require a dice to be spent. There are three actions (move, explore, recuperate) that require a 1+, and so can always be accessed.

If you roll too many dice of the same number, one of the tower’s pesky familiars will show up to cause trouble and generally get in the way.

The different characters provided in the box and the book allow you to tailor your force and offer some intriguing possibilities. If you want a group of Khornate warriors invading their rival god’s lands, you can do that. If you want Sigmar’s loyalists purging the area of chaos, you can do that too. These tailored forces offer some good basis for campaign based play, although the book doesn’t provide that specifically, there is a good base there.

No credit where credit is due

Being impressed with the rules and internal artwork I flicked to the front page to see who the designers and artists are. No luck. Nobody is credited for this game. This is a great shame and in my opinion a poor reflection of Games Workshop. This reminds me of British comics in the 70s, where writers and artists went uncredited. 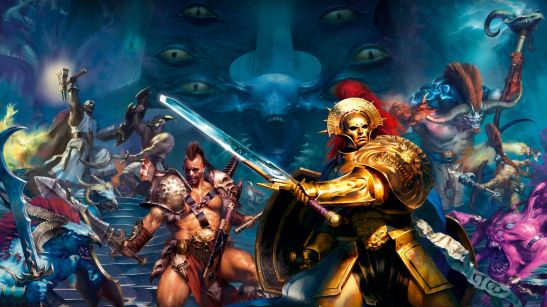 Ultimately this is a game packaged and sold at a premium price. It is a fun but not exemplary game, and in Australia at least it is essentially double the price of other similar games due to the GW tax. That can’t be avoided in any review.

The game is fun, and is a worthy successor to Warhammer Quest and may well outgrow its predecessor with the right support. The new app is a good start.

1. You liked the old Warhammer Quest, and are ready for a new take on the classic game.

2. You are a fan of Games Workshop’s models and are always looking for something different to collect and paint.

1. If you do not care for the new Age of Sigmar setting. This is unapologetically the setting for Silver Tower, and that will only continue. This is not dungeon adventures in the Old World.

2. If you like a generic fantasy dungeon hack. There are cheaper examples on the market, including the second edition of Descent.

This entry was posted on May 28, 2016 by davekay in Board Games, Miniatures, Review, Tabletop and tagged review, silver tower, Warhammer Quest.