One thousand, two hundred and seventy-four

This means there are many painted miniatures stuffed into boxes that are stuffed into other boxes, which are then stuffed into many nooks and crannies around the house.

A Christmas ping pong table gave me a flat surface and an idea: why not get all the miniatures I have painted out and photograph them all at once? So, I did.

I started with the oldest model I could find, which is this guy: 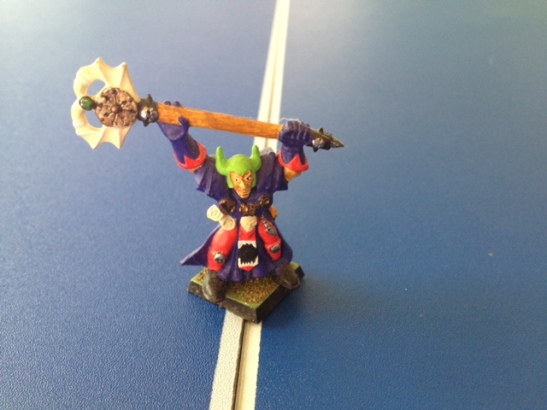 He’s a plastic chaos sorcerer, which I think I got as a free model on the cover of White Dwarf to celebrate the release of the Magic expansion for Warhammer 5th edition. It has… an interesting colour scheme.

Here he is, all alone: 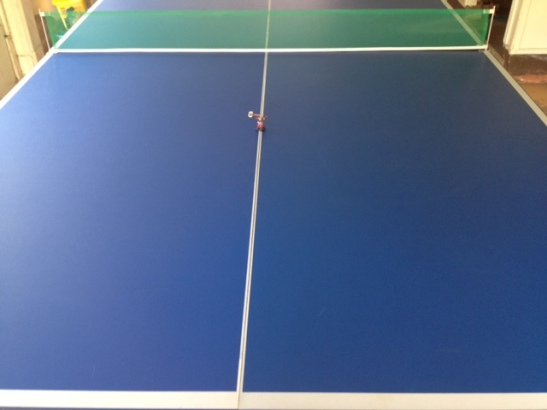 Don’t worry he’ll have company soon enough. The first thing to do with this flat surface was to put down those tablescapes tiles I painted: 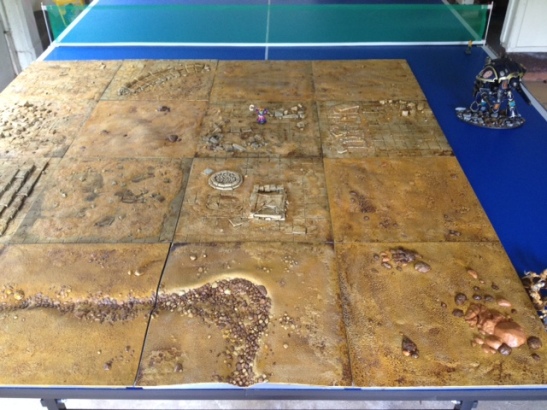 Okay, I hope you are looking closely at the chaos sorcerer there, because he’s about to get company: 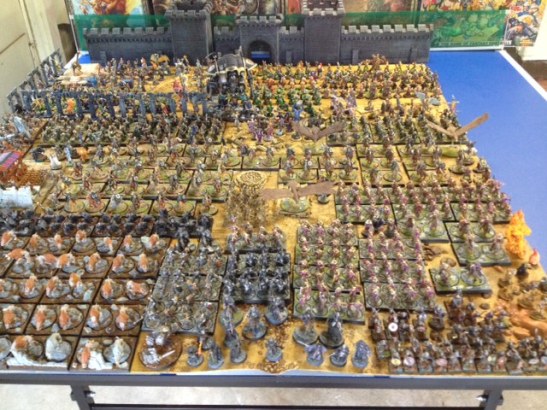 That shot above includes several hours of searching, pulling, lifting and placing and oh my poor back!

Everything I currently own that I painted is included in the shot above. If you can’t see the sorcerer any more, here he is again: 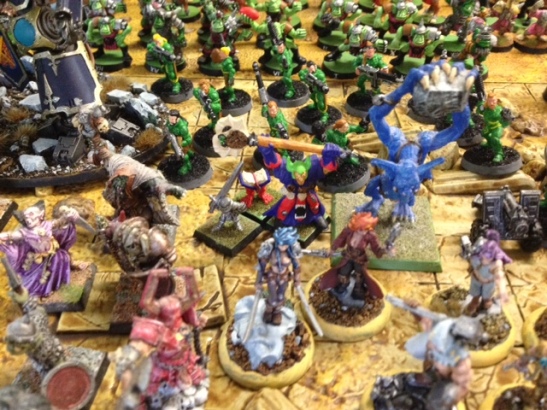 That book familiar must have been painted at the same time, since it uses the same blue/red colour scheme and has the same basic basing style. The troll and warrior familiar nearby also share this scheme and so date to 1995 or 1996.

Now let’s take a tour of the tabletop shall we? starting with… 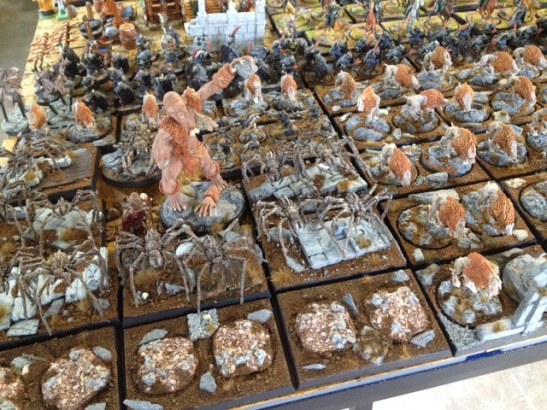 this lot, which formed a Misty Mountain army for War of the Ring. It includes models from a number of manufacturers. Yes, the stone giant’s hand fell off and needs reattaching. These models have a second life in Of Gods and Mortals as my Army of Wild Places.

The larger spiders there easily posed: 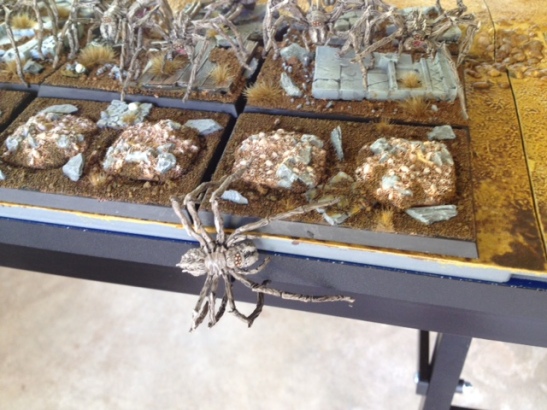 Behind the Wild Places army are some older pieces from the Warhammer Siege set, again mid to late 1990s vintage. You may spot the castle in the background of other images here. 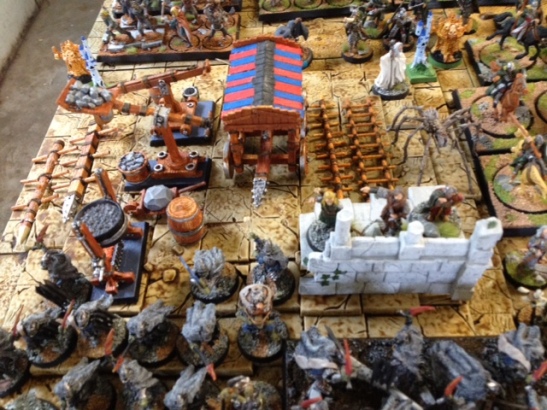 To the right of the Wild Places army is a small Mordor force, consisting mostly of Ringwraiths. I was a fan of both the generic and character wraiths and bought most of them. They now haunt this dry river bed. 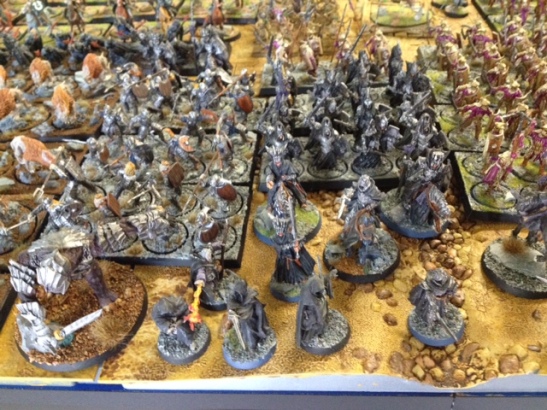 Moving further across are my Easterlings, now better known (to me) as the Goldenscale Army. Being able to recycle models I still like into new games has been fun. 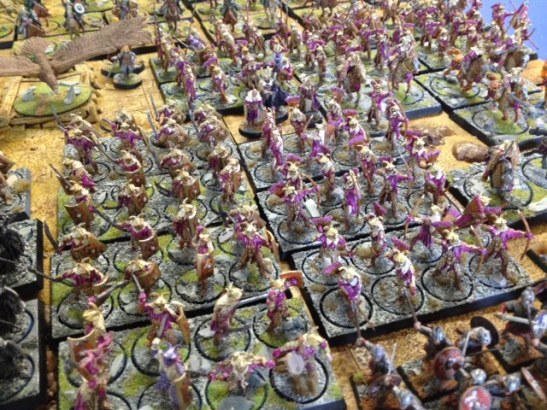 At the time I painted these Anglo-Danes for SAGA I thought I was putting together a large force. These 44 warriors occupy a tiny portion of the tabletop now. 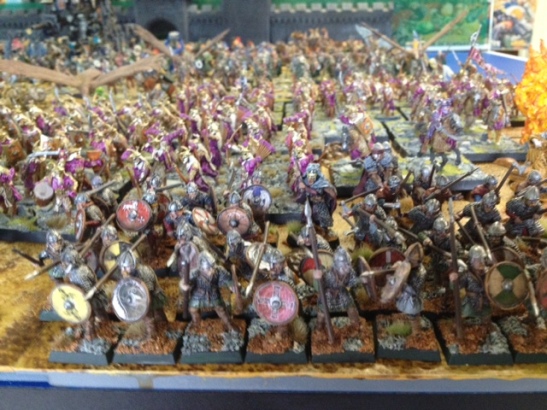 Who better to stand next to the well of skulls than my skeletons? And who is that hiding in a broken tomb behind an eagle’s tail? Why it’s a chameleon skink! The final remnant of my Warhammer lizardmen army. 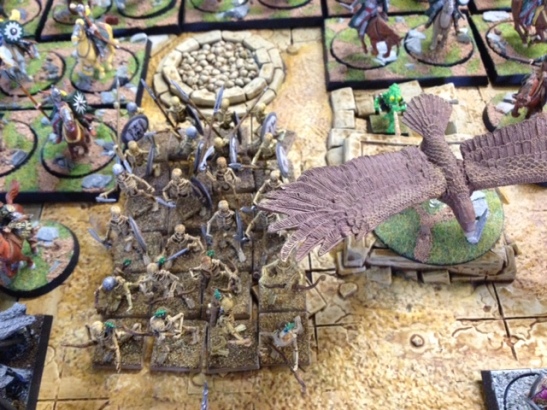 The Rohan army occupies the largest proportion of the table, which is funny because I never really enjoyed playing them in the games. I always felt they were outclassed by models which cost the same or less. Clearly I enjoyed painting them because there are just so many.

The Knight towers over the rest of the table 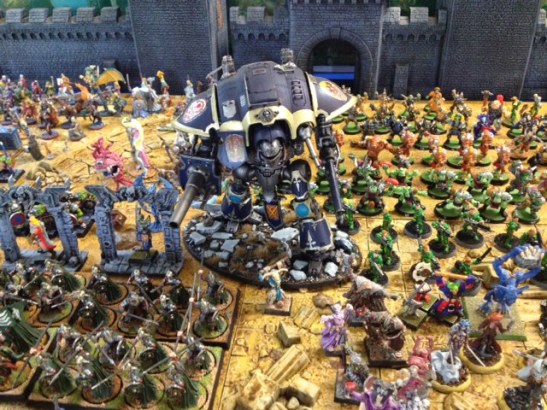 In its shadow stands a Van Saar gang for Necromunda. I guess the green seemed like a good idea at the time? 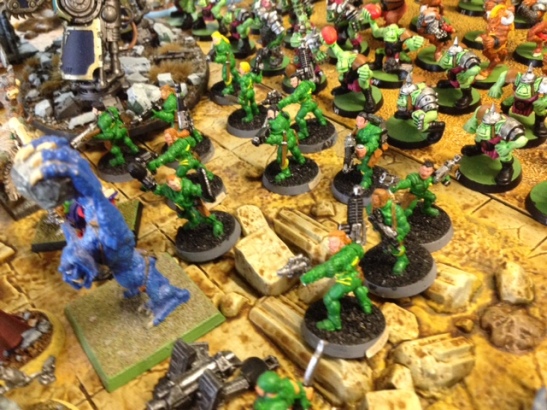 Next to the Van Saars are some harpies, a mix of Warhammer and Warhammer 40,000 models. I no longer recall why I have these. 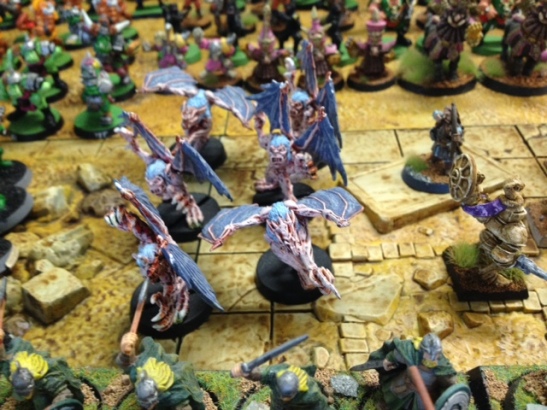 My Blood Bowl teams hand around at the back, waiting for half-time oranges. The newer Chaos team stands larger than the older GW models around them. At the front the pink Chaos Dwarf team is newly painted, though not new.

Sandwiched between these two teams are some ninja models. I made a team from these back in the days when I submitted articles to the Citadel Journal, but either I never submitted these guys or the submission was rejected. 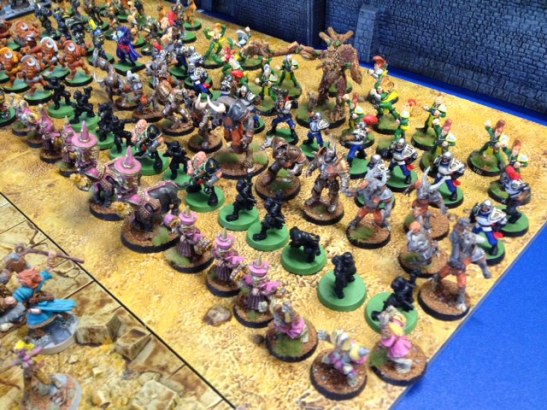 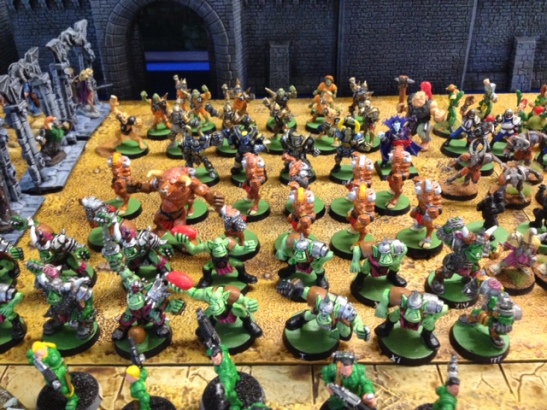 One submission that was accepted was my Beastman team, which you can see above behind the Orcs.

The blue surface of the table was useful for my Dystopian Wars Prussians. I really should finish the air wing. 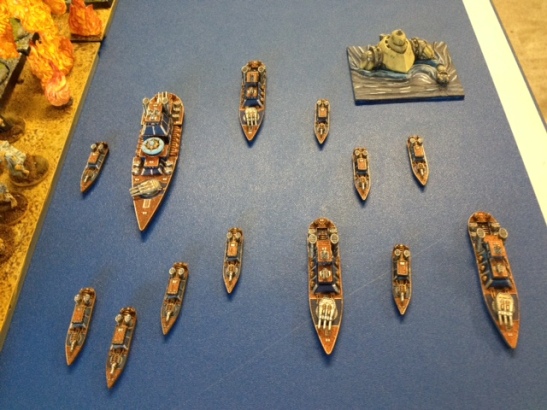 The final area of the table was given over to my ‘dungeon adventurers’. I cordoned off that part of the table with the doors from Warhammer Quest. They are models, and I painted them, so they are in!

Here we see three of the original four heroes from Warhammer Quest each in front of their own portal. I found the wizard. He’s not even undercoated. 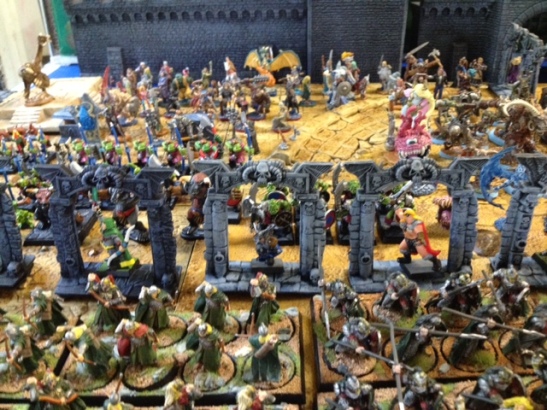 Each portal gets its own hero. Then the dungeon is named after them. There’s probably a game in that. 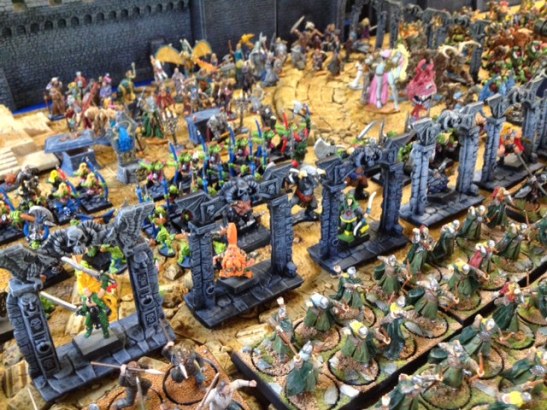 The impressive contents of the Warhammer Quest box can be added to the list of things I never painted. The orcs and goblins made it, and I even tried to paint a rock pattern on their bases. Yeah. 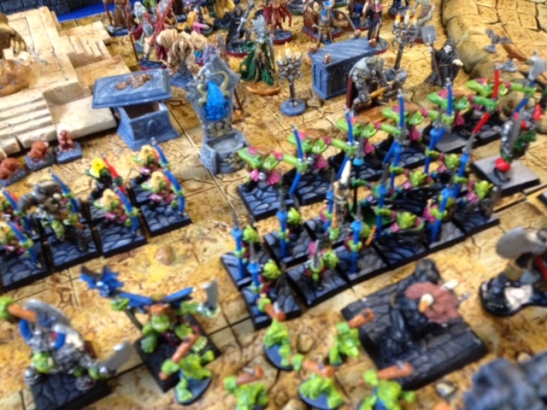 Behind them are the Talisman characters and some of the Bones models I have painted to date. 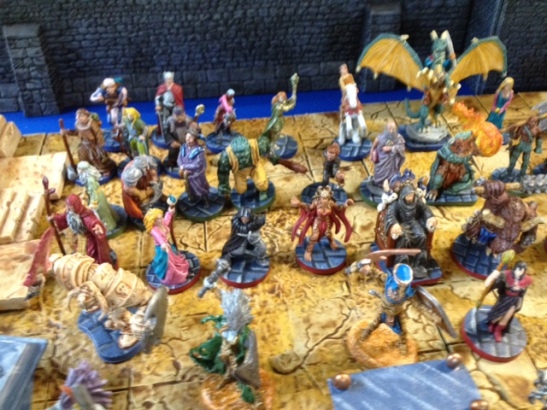 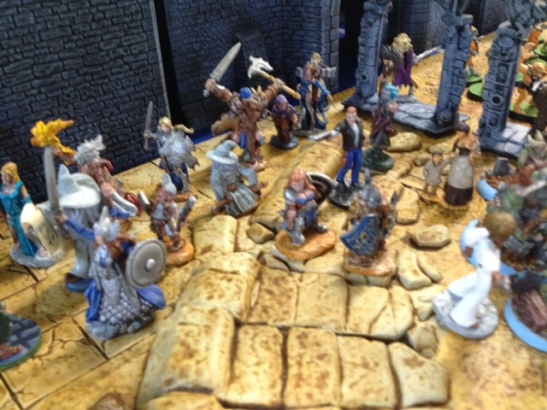 These models are an oddity. Again these are old Games Workshop pieces, from their Mighty Empires game. I decided to make a chess set out of miniatures. These were to be the rooks. I finished the set, but used it maybe once. You know what is good for playing chess? Chess pieces. 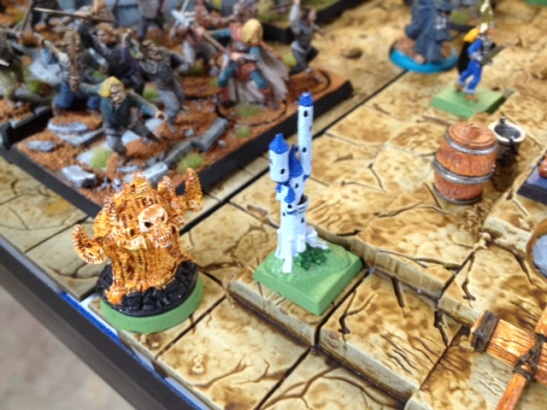 I’ll end the tour with a close up of those creepy spiders. Happy? 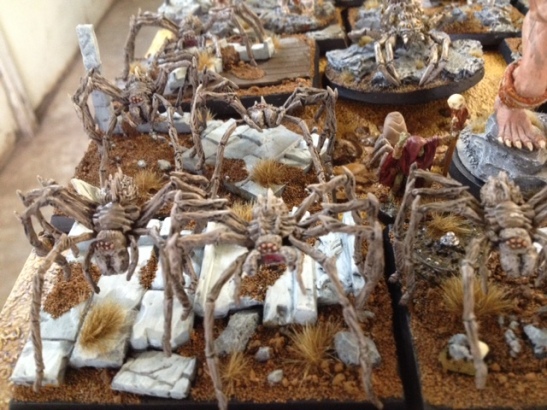 After a quick count I totalled 1,274 painted miniatures. Over 20 years that comes to around 60 models per year. Thing is though, I have sold off a lot of models along the way. Bretonnian, Vampire Count, Lizardmen, Beastmen, and Slaanesh Daemon armies in Warhammer. Chaos, Eldar, Orc, Squat, and Space Marine armies in epic, and the odd model here and there have all gone out the door. So the total painted is probably double what you see here. Which is a scary thought.

One final postscript: the total is 1,275. One model remained hidden from view until I was done. 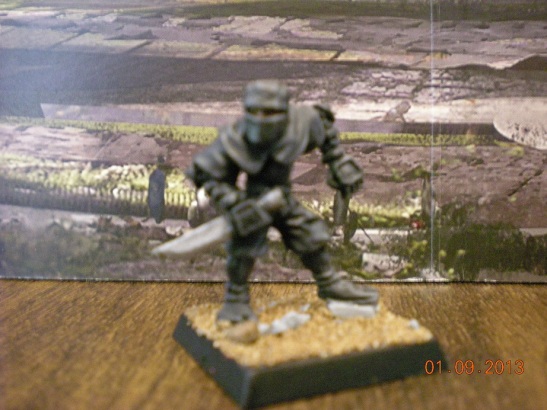 I don’t even have a non-blurry image to show you. Ninjas, right?

13 comments on “One thousand, two hundred and seventy-four”

This entry was posted on January 2, 2016 by davekay in Miniatures, Painting & Modelling, Tabletop, Uncategorized and tagged fantasy, miniatures, painted.