Draft of a gamer: salvage operation

Between work and study it has been a while since I have been able to draft at my local store. With Magic Online’s latest shenanigans jacking up the cost of an Origins draft, I felt paper was the better option. My store had three tables this time, the most I’ve seen at any draft.

I started off with what I thought would be a red/green renown deck, but ended up with just 16 playables in that combination. Some scraping the the barrel ensued, and I took a black/green deck to a reasonable finish, given the circumstances.

A powerful card in a colour that often lacks power. I felt this card would give me the freedom to go either green/white or green/red and focus on renown creatures and combat tricks. Things did not go according to plan.

I think what happened here is that half the table managed to draft usable decks, and the other half did not. I was in the other half. What I thought I’d done was draft a reasonable if somewhat thin red/green deck. When I laid out my playables I had 16 across green and red, and that included cards like Mantle of Webs and Caustic Caterpillar. I used a generous definition of playables and still came up short.

Looking through my other cards, I realised that while I hadn’t taken them on purpose, I had a usable component of black cards. Thus was born the accidental green/black deck.

The result: 2-1 and third place

My first match was against one of the players who managed to draft a decent deck. The inherent weakness of my deck was laid bare in this match. I was able to hold on for long enough to get my more powerful cards out but they did nothing for me. The deck simply wasn’t good enough.

My other two matches were against players in the same position as me. Match 2’s opponent had a mono-red deck. She’d been sitting on my left too. The player on my right had tried to put a white/red deck together. With three of us in a row taking red, none of us did well. So much for signals.

Mono red got off to a fast start in all three games against me. In the first and third game I was able to stabilise at around 10 life and then turn the game in my favour. In the second game I had a Demolish take out my only forest, leaving a lethal Shaman of the Pack stuck in my hand while Cobblebrute smashed through for the win.

A win is a win and I was on to round 3. My opponent here had a poor expereince with his mana, being stuck on a single plains in game 1, and then having to mulligan on game 2 and getting stuck on 3 land. His green/white decks was able to hold me back for a while, but was eventually overwhelmed. At one point I cast double Eyeblight Assassin to take out my opponent’s Yeva’s Forcemage, meaning my pair of Thornbow Archers could attack for a total of 4 damage. You won’t see moved like that on the Pro Tour!

In the second game I used Nissa’s Pigramage to accelerate into a Rhox Maulers that my mana-shy opponent simply couldn’t handle. He extended a hand and I was 2-1 for the night. 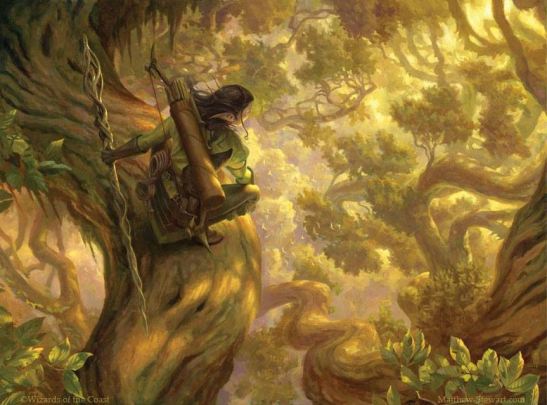 Caustic Caterpillar surprised me. I viewed this as filler that should be in the sideboard, but it had legitimate targets in all three matches and was never a dead card. Situational sure, but useful in this situation.

Other than that Rhox Maulers and Leaf Gilder were cards I was never unhappy to see.

The drafter sitting opposite me was vocal about how I’d picked ‘his’ two Fiery Impulses. He ended up going 0-1 drop, which I guess means he didn’t want to play with a deck he was unhappy to have.

I wasn’t happy with my deck either, but I dug in a eked out a air of victories. That worked for me.

Forcing myself to play on with a sub-optimal deck at least gave me the chance to play with cards that usually lay forgotten in my sideboard. The caterpillar was useful, and accelerating with Nissa’s Pilgramage was good. Still, this deck worked only against drafters who had had a bad draft. Let’s not kid ourselves here – this deck sucked!

CMC 1: Caustic Caterpillar, Might of the Masses, 2 Thornbow Archer

This entry was posted on August 30, 2015 by davekay in Magic the Gathering and tagged draft, magic, magic the gathering, mtg, origins.