The Aztecs are an aggressive faction in Civ 5. They performs best in jungle terrain and have bonuses designed to keep them in the fight for longer.

Pangaea is best for the Aztecs. With a conquering mind you won’t want to waste time fiddling around with shipping lanes.

For terrain you will like to see jungle or woods. The best way to set this up is to make your world warm and wet. 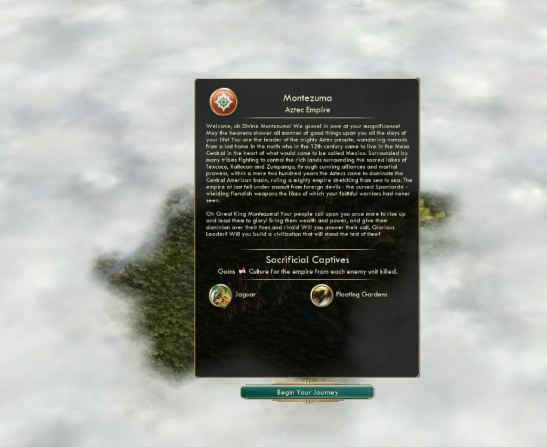 The Aztecs Jaguar Warrior is available from turn 1, and turn 1 is when you should start creating them. This unit is preferable to a scout, since its ability to move quickly through woods and jungle mean it loses out to the scout only in dry hills. With combat strength equivalent to a Warrior, this unit can take on barabrians and early civ units with ease.

In addition when you upgrade this unit it keeps the terrain movement bonus. 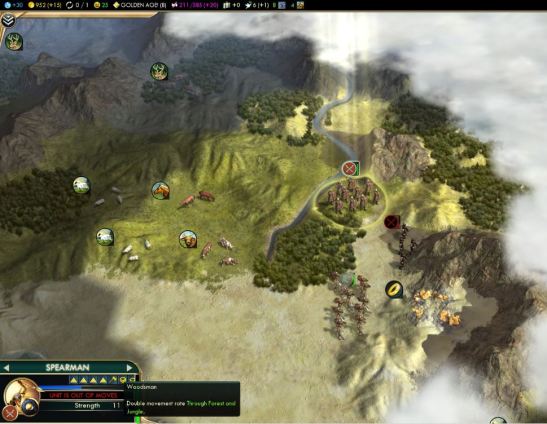 Your other strength is the Floating Garden. Cheaper to maintain than a water wheel and just as good.

I’m open for research strategies with the Aztecs. If you are building lots of Jaguar Warriors then clearly Iron Working will be important to upgrade these guys into Swordsmen when the time comes. However with a large army you’ll need gold, so researching what you need to upgrade your nearby luxury resources is also important.

This is easy. Honor, always Honor. The go hunt some barbarians. The Aztecs always receive culture for killing enemy units regardless of whether or not they are barbarians. This stacks with Honor so you get double the bonus when you kill a barbarian. 16 culture each time a barbarian brute is killed stacks quickly. At this point barbarian camps become culture farms.

First get some Jaguar Warriors out and exploring the terrain around you. I like to send them in pairs, as two Jaguar Warriors can deal with anything they come across. Don’t forget that they heal 25 hit points each tie they kill a unit.

Once your warriors are out exploring it’s time to consider additional city placement. By a river is best, as this gives the city access to Floating Gardens, though next to a lake is also fine.

Your first few cities should add to your army of Jaguar Warriors. Getting next to luxuries is important more for the gold, since you have a large army to support compared with other factions this early in the game. 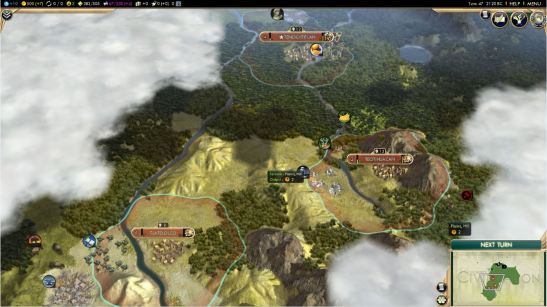 Pantheon choice is not super important to the Aztecs. You can take whatever suits you best.

Domination is usual, but all that culture can add up to a Cultural victory in a pinch.

This entry was posted on February 22, 2015 by davekay in Computer Games and tagged aztecs, civ 5, civilization, faction, guide, strategy.