The Magic panel was held at PAX Aus a few hours ago. As with the debut Pax , Aaron Forsyth was Magic’s lead speaker. Even though the timing has changed there were many spoilers that he chose to reveal first in Melbourne. Following on from last year’s mega spoiling of the Theros set was not going to be easy but he has done it!

The first set of information is about the Fate Reforged set. Khans of Tarkir was a set without dragons, and many cards alluded to the reason; in Tarkir’s past, they had all been wiped out. The planeswalker Sarkhan Vol has been lured back to Tarkir by voices of Ugin, a long-dead dragon of Tarkir. In Fate Reforged, Sarkhan travels back in time to heal Ugin of the wounds that killed him long ago. His actions will no doubt change Tarkir in the present too.

First up, here are two preview cards, one showing that there will be dragons in this set.

The pre-release format was also covered. With players again receiving a clan box. There will also be a special Ugin booster that ties in to the theme of saving this dragon from his fate. 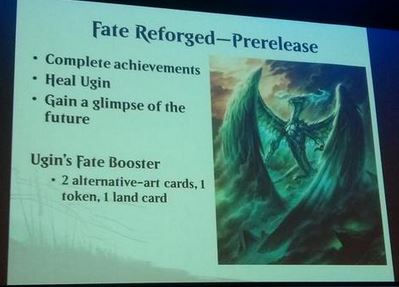 With the January set out of the way, we then received news of the February Duel Deck release. Again, this is going to be a planeswalker vs planeswalker box, with the characters coming from the previous year’s block (how will this work in the new two-block structure?). The next Duel Deck features Elspeth and Kiora from Theros block:

The planeswalkers come with great new art from Tyler Jacobson. There will be alternate art cards in the set, and although no cards other than the planeswalkers were revealed, we did receive some new art pics, including this great one from Terese Nielsen:

In case you thought dragons were only going to be in the second set of this block: 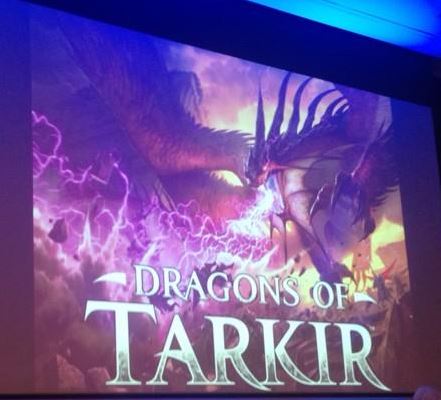 The name of the third set is revealed!