The making of a magic card (art)

For those like me who are interested in how Magic card art goes from concept to finished product, I recommend this article on MtG artist Steven Belledin’s blog.

It tells the story from the artist’s perspective of the creation of card art for Armament Corps, an uncommon in Khans of Tarkir.

The card concept caused some difficulty, from the article:

Put simply, the difficulty is this: I have to somehow compose a shot that is far enough away to include details of the immense war wagon that make it clear it’s a war wagon (say part of the beast of burden or the rigging for attaching said beast to the wagon itself), while being close enough to clearly show the soldiers and their equipment. This image then has to be legible when reduced to printed card scale.

Steven then goes on the explain the process of moving from his original concept, to a concept sketch, and then on to the final product. 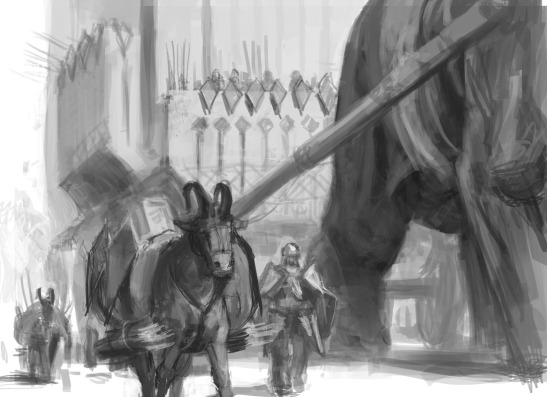 The article is interesting, informative, and well worth the time it takes to read. In fact there are many others like it on Steven’s blog. If you are an aspiring Magic artist, or simply interested in the commissioning and creation process, I recommend Steven Belledin’s Blog.

One comment on “The making of a magic card (art)”