The new Khans of Tarkir set takes us to a place ruled by clan warlords and riven by constant strife. It’s the homeworld of one Sarkhan Vol, and a place where dragons have been hunted to extinction.

The art in Khans of Tarkir follows the clan model of the block. Even the basic lands have a clan allegiance! It will be interesting to see how this changes in the nest two sets, as the clans won’t be present there (as I understand things). For now we can enjoy the art of this first set, and there is plenty to enjoy.

This illustration of a Mardu clan raider is a great one from Karl Kopinski. From the sun glinting off the armour to the focused look on the rider’s face, there is a lot of detail built into this one.

The Abzan clan patrol the deserts of Tarkir, protecting their fortresses and trade routes. The deserts aren’t entirely barren, and the Abzan clan know many secret places.

Roar of Defiance by Viktor Titov 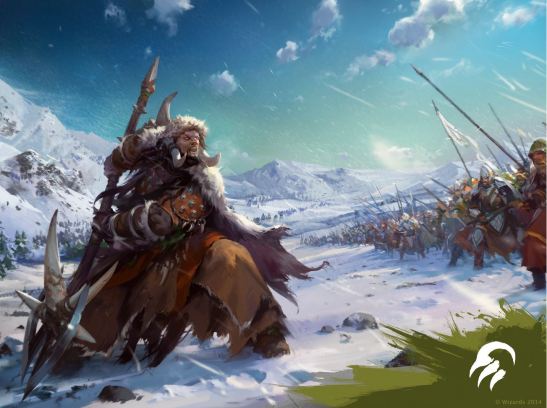 A warrior of the Temur clan faces off against an Abzan army in this art by artist Viktor Titov in his Magic: the Gathering debut.

There is a series of five clan banners in the set, each illustrated by Daniel Ljunggren. The one that caught my eye was the Jeskai banner, with its view from the top of one of the Jeskai clan’s fortress monasteries.

The Rakshasa allied themselves with the Sultai clan long ago. This great illustration by Nils Hamm shows why you wouldn’t want to meet one a night. Or nay other time of the day, really.

You can view the Khans of Tarkir card gallery to see all the cards in this set.