There were revelation on a number of upcoming Magic_ the Gathering sets at this year’s San Diego Comic-Con.

The Peer Through Time deck was the only one previewed. There will be four others, each with a Planeswalker Commander.

The Speed vs Cunning Duel Deck also received a reveal. As with last year’s pre-block duel deck, one deck Mythic is a preview for the set (last year’s preview was Polukranos, World-Eater), with the other being a reprint. This year we receive one of the clan leaders for the upcoming Khans of Tarkir: 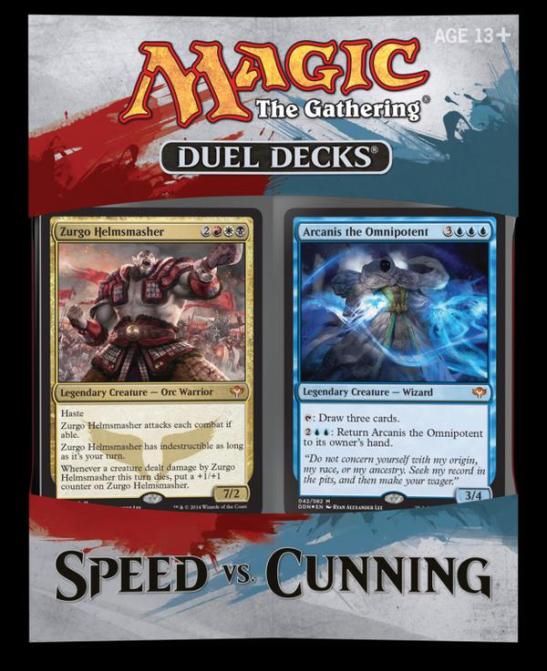 That was it for high-quality pics. Zurgo Helmsmasher was the only card previewed for Khans of Tarkir; however more info for the set and block was given:

The block structure will be large-small-large. The small set will be drafted with both large sets in turn.

The morph mechanic will be making a come back, this will no doubt help with multicolour Limited games.

Khans of Tarkir (the set) will be a multicolour set, using the ‘wedge’ colour trios. Zurgo Helmsmasher is one of five clan leaders, each will have a similar card. Each clan represent a different ‘wedge’.

Each of the five clans has its own mechanic, making for a total of six mechanics in Khans of Tarkir.

The block story is a time travel story (no confirmation of whether Temporal Investigators will be involved!). As such, the setting will change dramatically between sets, so the multicolour theme will be restricted to Khans of Tarkir. Maybe Sarkhan Vol will go back in time to find some still-living dragons to restore them to his home? The Magic equivalent of those people who reintroduce wolves to ecosystems. That’s my guess.

Also note that Zurgo is an Orc! The orc creature type hasn’t been seen in Magic for years, and wasn’t well used when it was there. This time they have put in the work to give these creatures their own identity, and I look forward to seeing how tat plays out across the block.