Hawk Wargames, the makers of Dropzone Commander, have a lot of news to share with us after their appearance at Salute 2014. 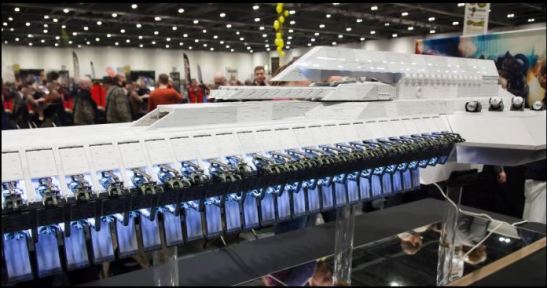 The biggest news by far is that they are creating a space combat game set in the Dropzone Commander universe with Andy Chambers, the creator of Battlefleet Gothic and Necromunda. Details are little more than that at this stage, with no release date for the game as yet. Hawk Wargames created the large scale ship above to promote this game (and also because it’s cool!) during Salute 2014. The actual models for the game will be smaller!

In other news, there will be an expansion and campaign system coming out for Dropzone Commander in 2014, the expansion introduces new models and a new faction, The Resistance.

In response to demand there will also be come larger scale versions of popular Dropzone Comander models, starting with the Post Human Republic’s Ares walker. Here’s a pic, with the original on the bottom right corner:

This should be an interesting year for Hawk Wargames!