Chris Rahn has put out a number of different Magic cards over the years. Each of these cards is striking in its own way. For me, his arts are united by a vivid use of colour.

Black Lotus is one of the most powerful Magic cards ever printed. Chris Rahn’s version shows the plant itself as the only vivid source of colour in the piece. The background is muted, showing a skeletal corpse on the ground. The plant is lit by an inner magical glow. Sadly this art will never appear on a real Magic card due to Wizards’ reprint policy (certain older cards will never be reprinted for any reason). This version was created for the Magic Online program, which is crazy as that program is so poor at showing off card art. Sigh.

2. Huntmaster of the Fells

This art shows a lone woodsman, facing a setting sun. Behind him the clouds and mountain tops are still lit, everything else is in shadow. He bears a recent round on one hand and the axe he holds in the other is bloodied. Chris Rahn uses no sharp colours here, but paints a vivid scene for us nevertheless. 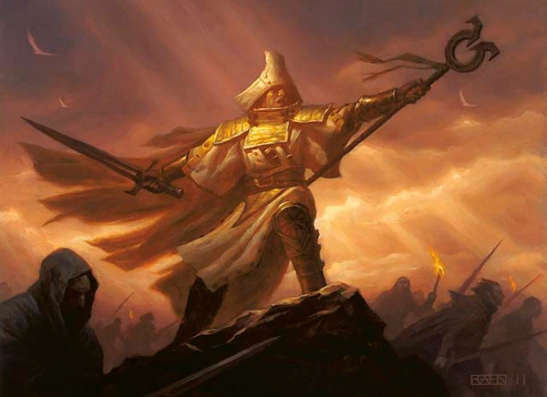 The pose here is not so very different from Huntmaster of the Fells, but here we see a battle leader rather than a loner. The commander is surrounded by soldiers charging forwards in the direction indicated. The commander wears white clothing with golden armour for protection. These shine where hit by the sun. The commander is one of the few bright points on an overcast day. 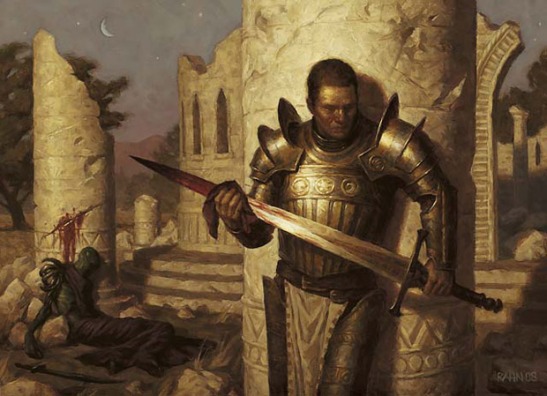 Anyone familiar with Rahn’s work for Magic knows of his ability to depict detailed and ornate armour on his subjects. One example is Giltspire Avenger. He carries a blooded weapon, and we see his defeated foe in the background. However it is the sword and armour that catch the eye.

5. Sword of War and Peace 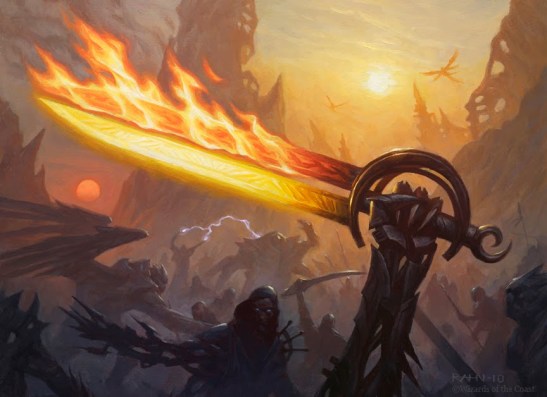 This sword is part of a cycle of five powerful swords, which each grant several abilities to the bearer. Chris Rahn has illustrated all five. The illustrations are quite similar, but with noticeable differences. Here this sword is being used in a melee, at is catching the light of the red and white moons of Mirrodin, where the sword is from.

This entry was posted on April 12, 2014 by davekay in Art, MtG Artists and tagged art, artist, chris rahn, fantasy, magic the gathering.